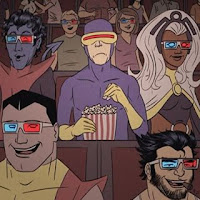 Our three-part Marvel retrospective/introspective begins here, as we cover their rip-roarin' movies from 1986 all the way to 2007! Join us for emo flip-hairs, post-it notes from Blade, and nukes from orbit. PRESS PLAY or download via the triangle in the upper right corner!

Show notes:
- Here's the infographic we used, and another one that was referenced.
- A special no-prize will be rewarded to the first listener that tells us which movie our opening song is from. Hint: notice the clap towards the end.
- While this episode was late, next week's will be on time, and all three parts of this Marvel feature are twice as long as one of our typical podcasts.
- Stay tuned till after the credits for extra ridiculousness!